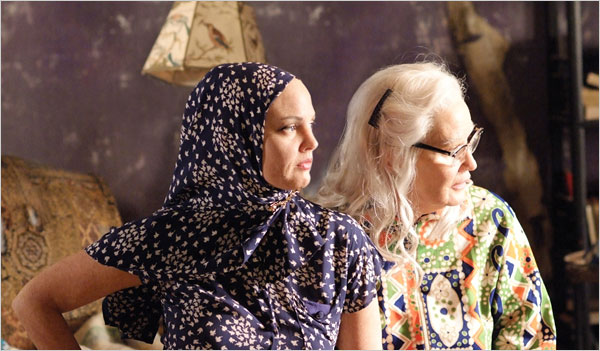 On Tuesday night, Eric and I joined a horde of zealous screeching gays at the AMC Van Ness to attend an Entertainment Weekly-sponsored screening of the HBO Films presentation of Grey Gardens. I know I don’t really need to recommend it to any of you, because I’m pretty sure you all already want to see it, so I won’t go on and on about how good it was. Well, maybe a little.

But first, the nuisances. Eric and I arrived at the theater around 5:30 or so, because the film started at 7 and seating was limited (a pass didn’t guarantee a seat). I wasn’t as fortunate as my coworker Dan, who somehow managed to use our corporate power to finagle himself a spot on the “VIP list” with the EW reps; after I’d already been in line for an hour, Dan came fannying with a pack of gays, stopping by briefly to commiserate with me for having to wait in line before sailing over to the EW rep and skipping into the theater. Hmph.

Meanwhile, Eric and I were stuck a few spots behind a group of presumably homeless people who looked like they were just killing time indoors before being kicked out by building security. But, no: they had passes! I have no idea how this happened, but the hobos were going to be seeing the movie with me. Once we finally got into the theater, I noticed them huddled together in the very back row, setting up camp and growling at one another. One of them had a tiny flashlight, which he pointed at the screen and used to illuminate an impromptu shadow puppet show that probably kills on the train-jumping circuit.

Then, an aggressive middle-aged couple decided to involve my row of theater patrons in one of the all-time classic “Hey, asshole” movie theater activities: they decided that, since they got there later than the rest of us and couldn’t find two seats together, this was somehow our problem. We had one empty seat at either end of the row. You can guess where this is going.

The horrible woman shoved her way to the middle of the row and began instructing us, teacher-style, to all move down a seat. “Please move down a seat, everyone. Could everyone please move down a seat. It’s just one seat. Please move down.” Now I’m a very passive person, so I was prepared to make this accommodation, regardless of how rude and obnoxious it was for her to make it. I mean, she was literally asking an entire row of people to get up and move so she could sit next to her boyfriend. I am not the kind of person who would ever, ever do that, and I can’t even begin to understand those who do.

But then, my row did something that made me fall desperately in love with them: they ignored her. Or, should I say, we ignored her. She stood there, right in front of us, very loudly asking us to do something. And we just sat there. No one even said a word. We just acted like she wasn’t there. It was fantastic. Eventually the woman gave up, although not without giving us all a few dirty looks. “I guess they don’t wanna move!” she reported to her awful boyfriend, with an unmistakable “Can you believe these assholes?” tone in her voice. And so, they were forced to separate, which provided our row with a collective sense of smug relief. It was probably for the best. They seemed like talkers.

With those assholes out of the way, we just had a few more technical problems to deal with. For instance: whatever slacker they have working in the projection booth didn’t bother shutting the lights off in the theater until the movie had already been on for about 10 minutes. As it turns out, it’s pretty damn hard to see a movie when the house lights are still on. People were not amused. Assorted shouts and demands were issued around the theater, and the EW rep informed people that the “situation was being handled.” It’s like, what fucking situation? The fact that the lights are on? Why don’t you just fucking radio whoever’s smoking pot in the projection room and tell them to flip the fucking switch? I used to work at a theater, I know how these things work!

Anyway. Eventually the lights went off, and we settled into the movie. However, I think they may have shut off a few essential lights while they were at it, because the movie looked absurdly dark. Like, God forbid a scene took place at night, because you couldn’t see shit. Whether this was from ineptitude or spite, I guess I’ll never know.

So: the movie. It’s good, but not great. It suffers from that familiar biopic curse of oversimplification. It takes decades of strange, mysterious history and condenses them into an easy-to-follow 100-minute narrative, sacrificing the complexity and ambiguity that would have made the film much more enriching. In reality, there was nothing easy to understand about how the Beales ended up the way they did. The movie just makes things a bit too tidy. It also desperately wants to give the women some kind of redemption, especially Little Edie, who gets a somewhat happier ending than she did in real life.

The acting is pretty much flawless. Jessica Lange is one of the greatest actors of the last 30 years, so it’s no surprise when she turns in a fine performance; however, it’s genuinely remarkable how seamlessly she embodies Big Edie, especially in the documentary setting. Big Edie had a much smaller presence than Little Edie in the documentary, so Lange has to find Big Edie’s humanity and pride and sorrow in tiny little nuances. And she finds them beautifully.

And Drew! Wow. Watching her embody Little Edie is downright intoxicating. I felt giddy everytime she was onscreen, especially in the latter years. Some might say that she’s just a brilliant mimic of Little Edie, but I’d beg to differ. She takes those oh-so-familiar words and mannerisms and invests them with real heart and feeling. It’s truly a joy to watch her.

One last thing: there’s been an outcry in the blogosphere that people shouldn’t watch this film until they’ve seen the original documentary, as if you can’t possibly enjoy or appreciate this film unless you know the source material. I don’t necessarily think this is true. I’ve only seen the documentary once, about two and a half years ago, and watching this just made me want to watch it again. This film works best as a companion piece to the original doc, because it helps shade in the backstory that’s never explicitly spelled out in the first one. I don’t think it matters which one you see first, as long as you see them both.

This post originally appeared on The Sassmouth Chronicles on April 17, 2009.