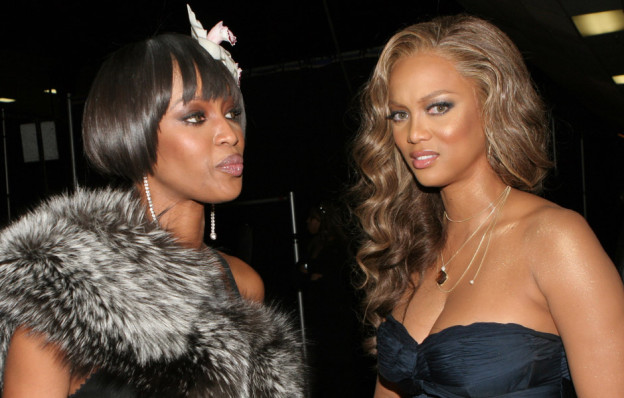 There’s just something about Tyra. She has the uncanny ability to simultaneously bring out the worst and gayest in people – which is sometimes one and the same. Remember that bitch who got stabbed because she was being too loud during Top Model? Refresh your memory: http://seattlepi.nwsource.com/local/360576_model25.html I can certainly understand this reaction. While I haven’t gone so far as stabbing someone for refusing to shut up during ANTM, I’ve come pretty effing close. I mean, I don’t watch the show so I can see the models; I watch so I can hear the truly inspired nonsense that escapes their pretty mouths (xoxo Jade!).

A less violent, yet still very heated, Tyra-related dispute erupted in my office the other day. The opponents were myself and my gay coworker, Scott. It all began innocently enough. I was explaining the original title of this blog, “See the Difference?”, to our straight coworker, Ryan (the three of us share an office). For the uninformed, “See the Difference?” is a reference to my favorite part of any ANTM episode: the part where Tyra tells the girls some ridiculously minor thing they did wrong with their facial expression, and then shows them the right way. It always goes like this:

“Joanie, you made this face: (makes face). But what you should have done is this: (makes exact same face, occasionally with an arched eyebrow). See the difference?” And the answer, invariably, is NO, we don’t see the difference, because you’re a crazy person.

So, as I was in the middle of explaining this to Ryan, Scott (who is also an avid ANTM fan) jumped in and began offering additional explanations of Tyra’s inimitable ways. “Oh yeah, and then she’ll be like, ‘A model who does this very well is Christy Turlington! If you want to see someone do this beautifully, look at Naomi Campbell—”

And that’s when shit went down. Finger flying into the air, I made a long sassy “girrrrrrl” sound, and then said, “Uh-UH! Tyra will NEVER say that bitch’s name on the air! Ain’t never happened, ain’t ever gonna happen!” (I was really feeling the sass). You see, TyTy and Naomi have had a very open rivalry for many, many years. Some might say it’s because they were both women of color fighting for their place in a racially homogenous industry, but really, it’s just because Naomi is a psycho-ass bitch. I’m sure someone told her once that Tyra was her competition, and the war began immediately. They could just as easily have pointed at a microwave and said it was her competition. Naomi would have blown that shit up the next day.

However, Scott disagreed with my recollection of the show. Raising his finger and cranking his neck for extra sassy emphasis, he said, “Uh, yes she did!”

Me: “No she did NOT. Tyra HATES that bitch! She will NEVER SAY HER NAME!!!”

Scott: “She ABSOLUTELY said her name! I can tell you exactly which episode!”

Me: “I’d like to hear it, because that shit NEVER HAPPENED! Tyra would sooner DIE!!!”

With every screeched word, our body language became more and more aggressive, and our lisped words crescendoed into a fever pitch. All the while, poor Ryan sunk further and further into his seat, shielding himself from the gay radiation emanating from our side of the room.

It went on and on, until eventually Scott described an exact scene in which Tyra allegedly mentioned Naomi by name. He claims it was during an episode where Tyra made the girls walk in fetish footwear. Naturally, some of them fell; so, during judging, Tyra gave some allegedly helpful pointers about what to do when you wipe out on the runway. Purportedly, she explicitly mentioned the time that Naomi tripped over her own insanity (my words, not hers) while on the catwalk. I could neither confirm nor deny Scott’s claim, so I merely asserted that this was a backhanded compliment at best, and really only kept the feud going by mentioning one of the more embarrassing moments in Naomi’s career.

At present, the question still lingers. I asked Scott #1 (my boyfriend and fellow ANTM historian) about it, and he said he recalls the episode, but doesn’t think that Tyra said Naomi’s name. His recollection is that she merely said a “very well-known model” had famously wiped out on the runway, and everyone knew she meant Naomi. This sounds more like Tyra, who generally doesn’t say models’ names when telling stories about the industry. Can anyone solve this question once and for all? Logan?

UPDATE: Vindication! Using the invaluable FourFour blog as a resource, we’ve been able to solve this question once and for all! Rich Juzwiak, ANTM blogger extraordinaire, does a thorough episode recap every week, and has been doing so for several years now. He blogged the sixth cycle, which included the alleged reference to Naomi during the fetish footwear episode. And he explicitly notes:

“Notice how even though Tyra supposedly made up with Naomi Campbell, she still couldn’t bring herself to name her former arch-nemesis (also, “Fell to her booty?” wtf?).”

Ha! So there! Also, check out those two links. The first one is a detailed recap Naomi’s conciliatory appearance on Tyra’s talk show, and the second is an MP3 file of Tyra’s non-reference to Naomi during the episode. Check out the full recap here.

This post originally appeared on The Sassmouth Chronicles on August 4, 2008.