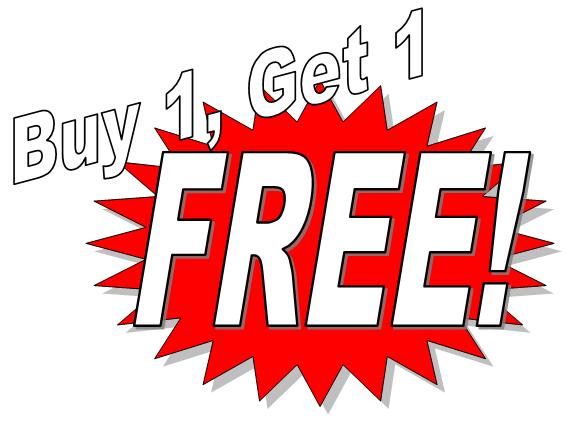 Today is a truly beautiful day. It is the first Tuesday of the month. And to me, that means only one thing: it’s BOGO day!!!

Allow me to explain. A few blocks down the street from my office, there is a little corporate diner called Camille’s. The food is decent – mostly wraps, pitas and salads. But all this is beside the point. On the first Tuesday of every month, Camille’s does a full all-menu BOGO (that’s Buy One Get One Free, for the ignorant and uninitiated—I guess it should actually be BOGOF, but I don’t make the rules).

On this day, you can purchase two lunches for the price of one—no strings attached, no downside. It feels like a little slice of heaven, right here on earth. While many of Camille’s patrons use this as an opportunity to take their friends and coworkers out for a “free” lunch, you better damn well believe that I’m eating both of those wraps. Some might say this makes me a fattie, but I think it just makes me someone who enjoys a good bargain. Because really, if you’re not eating both of them, what’s the bargain? This may be fattie logic, but I stand by it.

When I worked at The Sharper Image, the first Tuesday of every month was a sacred rite to me. Everyone in my department knew not to disturb me during the noon hour on those days, and pity the fool who suggested that we go and “share a BOGO.” However, when I left TSI for my ill-fated foray into publishing, I had to bid adieu to BOGO Tuesdays. While I told myself I was moving on to bigger and better things, part of me was weeping inside.

So, imagine my delight when I found myself once again working in the Camille’s neighborhood! While I technically only missed two BOGO days between TSI and now (June and July), those are two too many. It was my first thought this morning.Today is BOGO Tuesday. Today will be good. As the minutes clicked by, I began to imagine which wraps I would get. My old favorites were always the Quesadilla and the Bangkok Thai. Should I pay homage to the past and order those, or perhaps try something new? This is a new job, after all.

Moments before I was getting ready to sprint out the door, a kindly coworker popped her head into my office. “Hey there!” she said. “Have you eaten yet?” Immediately, I tensed up. I do not like it when people interfere with BOGO Day. Through clenched teeth, I responded, “No. Why?”

“Oh, I was just wondering if you wanted to go upstairs with us and get lunch.” Great. For the past four weeks, I’ve been waiting for my department to invite me in on their lunchtime plans. And now the first time they do is on freakin’ BOGO Day. Well, which do I choose: taking an unprecedented step toward building positive working relationships with my fellow staff, or stuffing myself with two wraps for the price of one?

“Get the hell outta here, it’s BOGO Day!” I thundered. Okay, I didn’t do that. I politely replied, “Actually, I’m going to a place down the street today. But thank you! I appreciate it.” Having sufficiently rid myself of the friendly coworker, I was free to strap on my eating dress and haul ass down the street to my glorious Camille’s.

Fast forward about 10 minutes: I am seated at a patio table outside Camille’s, two tantalizing cardboard trays in front of me. The wait after I placed my order had been agonizing, but once my number was called, I ignited. I don’t actually remember anything between my number being read and almost finishing the first wrap (about a 45 seconds time-lapse). But eventually I came to, and realized that I’d polished off about 3/4 of the Quesadilla Wrap.

I took a moment to savor the heady mixture of melted cheese, grilled chicken, bacon, and sour cream. As I dove in for another bite, a piece of chicken escaped from the wrap and fell into my lap. Panicked, I threw the wrap down and went after it.

It was at this point that I began to understand that nothing is really free. Sure, I hadn’t paid for my second wrap with money, but it turned out that the BOGO gods required a different sacrifice from me: my dignity. So as I stood in my company bathroom, feverishly wiping my shirt and crotch with a wet paper cloth, I couldn’t help but ask myself: was it worth it?

And the answer, of course, was definitely.

This post originally appeared on The Sassmouth Chronicles on August 5, 2008.