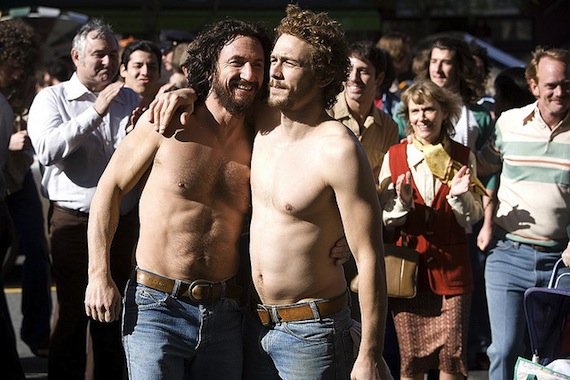 And no, I’m not just talking about the impressively hung Felicity Huffman in Transamerica. I came across a very disturbing post on Towleroad today. Titled “James Franco on Sean Penn’s Penis Envy in Milk,” the article described Franco’s appearance on Jimmy Kimmel Live last night. While he was booked to discuss Pineapple Express, Franco instead found himself being badgered by Kimmel about his work in the upcoming Milk (which co-stars yours truly!…and half of San Francisco). Being Jimmy Kimmel, he naturally began pestering Franco about the extent of his gay love scenes with Sean Penn. After the obligatory mention of his discomfort with these scenes (which is odd, because I was almost certain he was gay; I thought it was either him or the too-similar James Marsden, but that one’s married…not that that means anything, but I digress), he began discussing his nudity in the film. At first, I was like, “Jackpot!” But then, he said this:

“I was very uncomfortable but the make-up artist on the day handed me this prosthetic penis and said here, you can wear this. It’ll make you more comfortable…The scene went on for a long time, like half the day. It’s just getting old — diving into this pool naked. And I go over to Sean and I guess he didn’t know I was wearing a prosthetic. And I said to Sean, ‘You are such a great actor. You wouldn’t do a scene like this if they asked. You wouldn’t dive into the pool naked,’ and he said, not knowing I was wearing a prosthetic he said, ‘Well James, if I was built like you, I would.’ I didn’t say anything. Cut to a couple weeks later we did this scene. We’re both dancing and we’re both naked, and we both now had prosthetic penises. He finally put it together that I’m wearing the Boogie Nights prosthetic. And he said ‘James that time in the pool!’ And I said ‘Yeah I was wearing the prosthetic.’ And he said ‘God, I’m so relieved.’ And then, he’s like ‘You show me your prosthetic, I’ll show you mine.’”

Haha. Oh, wait. What??? WHAT?!?!? After getting past my initial excitement at all this penis talk, it began to sink in: if James Franco and Sean Penn were wearing prosthetic penises in a gay-themed independent film by an openly gay auteur like Gus Van Sant, how many other onscreen penises have been prosthetics?!?!?!? What’s become of the world when we can’t even trust that penises aren’t secretly made of foam and rubber?

Now, obviously I’m not talking about the legendary prosthetic worn by Mark Wahlberg in the final scene of Boogie Nights (as referenced by Franco in the quote above). I was planning on posting a picture of it here, but I was worried it would get my blog flagged as porn or something; so, if you haven’t seen it before (or would like to see it again), you can click here. No, I’m talking about the many other onscreen penises that have delighted and thrilled gays everywhere for the last 20 years or so (ever since Harvey Keitel ushered in the modern age of the Male Full-Frontal in Bad Lieutenant and The Piano). Ewan, was it all McPhony? Kevin, were you fakin’ the bacon? I am terribly vexed by all of this.Now don’t get me wrong, I can certainly understand why an actor would use a prosthetic penis. Acting is a nerve-wracking thing, particularly when you realize your every move is being committed to film, where it will be endlessly viewed and dissected for years and years to come. Hence, actors want to make sure they’re giving the best possible performance, since movies, once completed, are somewhat eternal. After all, we still watch short silent films that were filmed over 100 years ago. Who knows what digital technology will do to the average shelf life of a movie?

So, by the very same rational that an actor wants to give the very best performance they can, they also want to look their very best (unless the role calls for Charlize-style uglification, or that other well-known prosthetic enhancement: an Oscar-friendly fake nose). And if an actor is going to be showing the goods, they damn well wanna make sure the goods look…well, good. And, not to dive too deeply into the gender politics of internal vs. external genitalia, but when a man shows his stuff on film, he’s really putting himself all out there.

I’m certainly not implying that female actors who do nude scenes have it easy; but at the same time, it’s more culturally normative for female actors to do nudity than it is for men. Male nudity continues to occur primarily in comedies, to maximize the audience’s assumed responses of shock, embarrassment and awkwardness. Female nudity, however, is almost always used for the purpose of arousal (with the brave exception of Kathy Bates in About Schmidt, God bless her.) So, the stigma of shame that surrounds male nudity is generally reason enough to keep most actors well within their pants…

Well now I’m just rambling. Look at me, pretending to be all high-minded when really I’m just mad about phony penises. I mean, there are Web sites that make tons of money by offering people access to stills and videos of alleged celebrity nude scenes, all of which now seem suspect in light of this Milk revelation. Not that I am a member of sites like that. At least not anymore.

Anyway gays, I guess what I’m trying to say is, in the immortal words of Public Enemy: can’t truss it! When you line up to see Milk this fall (and I know that you will), and you find yourself getting all riled up at the sight of James Franco and Sean Penn’s penises merrily bouncing around onscreen, please remind yourself: it’s just another Hollywood lie.

Their asses will probably be real, though.

This post originally appeared on The Sassmouth Chronicles on August 8, 2008.