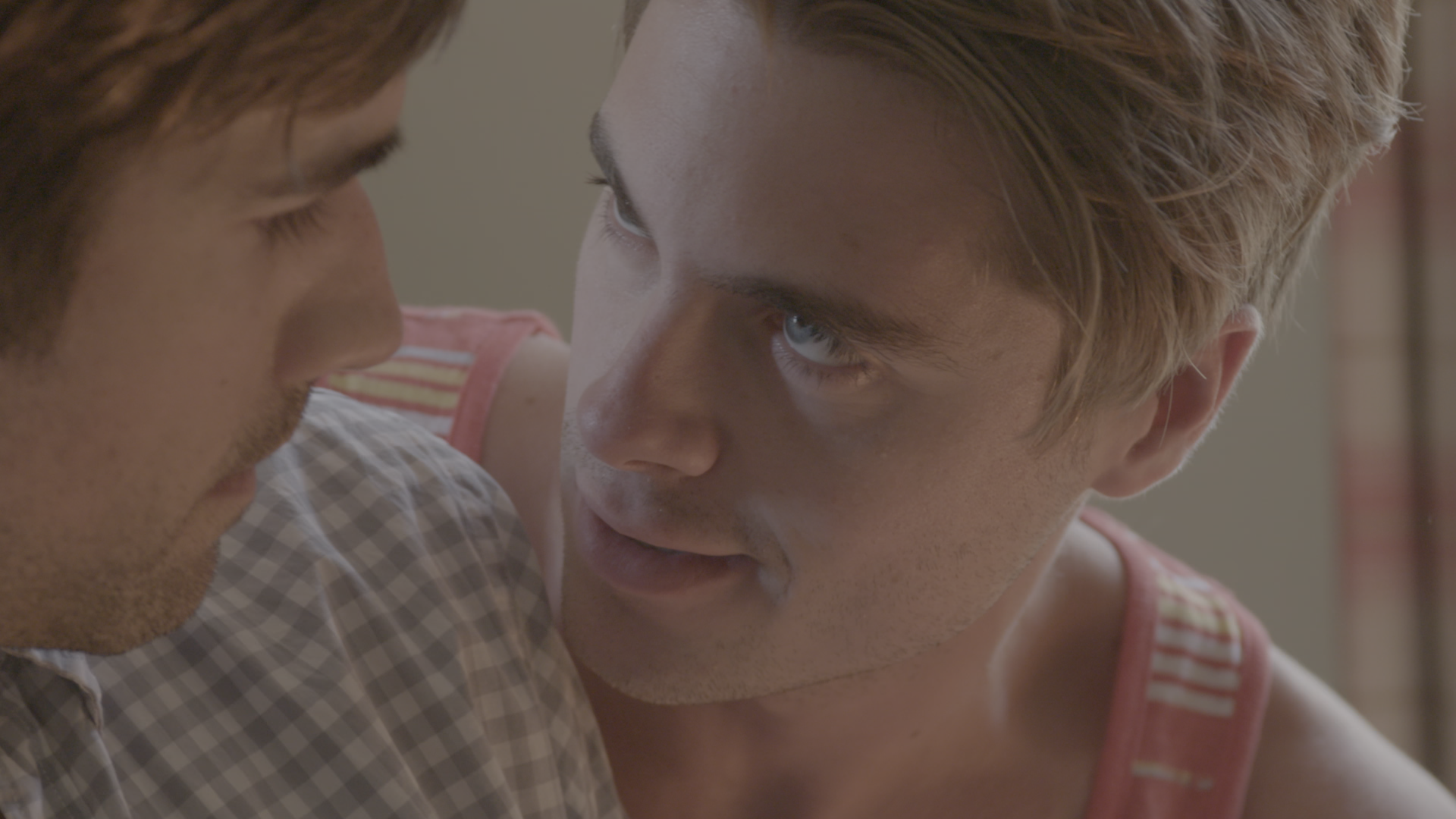 The idea that beautiful people can get away with anything is taken to brutal—and brutally funny—extremes in the comedy-thriller You’re Killing Me. Directed by Jim Hansen from a screenplay he co-wrote with star Jeffery Self, it’s the story of Joe (Matthew McKelligon), a dreamily handsome but severely disturbed ex-mental patient who finds love in a hopeless place. Namely, he finds love in an east-of-Hollywood enclave populated by creative-underachiever gays and their day-drunk lady friends who subsist entirely on pop culture game nights and wig-strewn web content. And by “love,” I mean he finds lots of people to kill.

Joe’s entry to this world is George (Self), whom he meets one night under mutually confused circumstances: George assumes this handsome man with the smoldering gaze is cruising him, but Joe is actually thinking about murder. Having recently killed for the first time, Joe realizes it’s his calling, and is seeking out further opportunities to do so. He tells this to George in no uncertain detail, and calmly reveals each and every subsequent murder he commits. There’s just one problem (aside from all the murdered innocents): George has become so steeped in his social circle’s facetious irony that he assumes Joe is just being a jokester. Plus, he’s super hot! So naturally, they start dating. But as members of his circle begin to perish one by one, will George stop checking his Twitter mentions long enough to notice before it’s too late?

If You’re Killing Me‘s merciless depiction of this world and its inhabitants feels especially well-informed, it’s because its creators know it all too well. In addition to his prolific career as a wardrobe supervisor/costumer for film and television, Jim Hansen has become best-known for directing such cult-sensation web series as Drew Droege’s Chloe Sevigny series and Paragon School for Girls (which featured Self and Droege).

After first gaining national attention during his 2009-10 Logo series Jeffery & Cole Casserole (with frequent collaborator Cole Escola) and memorable TV guest roles such as Liz Lemon’s gay cousin Randy on 30 Rock, Self has amassed devoted followings across every conceivable (non-pornographic) online channel, from his Instagram and Twitter to his podcast and YouTube channel; he’s also a published author whose third novel comes out in April. The supporting cast consists largely of Hansen and Self’s friends, many of whom have similar track records, such as Droege, Bryan Safi, Jack Plotnick (Girls Will Be Girls), and Sam Pancake (Arrested Development). I recently rang up Self and Hansen to further discuss their vision.

With so many amazing shorts between the two of you, what was it about this story that gave you the drive to create your first full-length feature together?

Jim Hansen: Jeffery and I are close friends and have been for a while, so we were like, “We should just make a movie.” You can do that nowadays! So we were pitching ideas back and forth about what we wanted to do, and we decided on something that blended two of our loves: Jeffery loves romantic comedies and I love horror movies. Then we came to the idea of a movie that has genre shifts, where you sort of betray the audience and make them think they’re in one kind of movie, but then they’re forced into another movie that’s maybe a little uncomfortable and surprising. It was an idea that was doable within our constraints, and novel enough that there was some challenge to it.

Like all the best horror movies, You’re Killing Me has a generous helping of pointed social commentary, since we watch a serial killer go undetected among a group of self-obsessed friends who give him a pass because he’s hot and think his “I’m about to kill you” expression is a look of seduction.

Hansen: You nailed it!

Jeffery Self: Yeah, totally. That’s so what it is. I think underneath that, what we wanted to write about is the idea that none of these characters are really listening. When they refer to Joe, they don’t talk about him as potentially a weirdo; they talk about him like, “Oh, you’re hot! You’re not scary, you’re gorgeous.” Basically we wanted to write a story about how we’re not listening—how we’re more interested in documenting our lives, making a joke of our lives, being ironic with our lives, than actually living them and being present, and the dangers of that.

It seems like George’s nearly fatal flaw is that he’s just incapable of hearing or processing sincerity, which makes him so oblivious to Joe’s total and complete honesty about his activities.

Self: Exactly. I mean, the idea of sincerity to George is pretty foreign.

Would you say that Joe is even gay? He seems drawn to gay men on some level, but he has no physical drive toward them beyond murdering them, which he also does to women.

Hansen: I think all of his sexuality is subverted into his violence and his psychopathy. His attraction is not sexual, it’s murderous. In the movie, he’s basically coming to terms with the idea that he’s a serial killer. He’s always been gay; I think he dealt with coming out as gay a long time ago, so that isn’t the issue in the movie. It’s that he’s actually coming out as a serial killer.

The murder scenes are shockingly graphic and disturbing, yet they’re offset by dreamy lighting and gorgeous music.

Hansen: Right. For Joe, these murders are like a beautiful exploration…

Self: He’s coming into himself.

Hansen: …it’s like you’re on drugs: your eyes dilate and the colors become more saturated, and everything becomes clear and more beautiful. This is his drug, this is his high. He realizes that this is what he’s supposed to be doing. In his mind, this seems like the right thing because this is where he finds his place in the world.

The way this movie leaves its characters and story, it seems ripe for a sequel. Would you consider revisiting it?

Self: Oh yeah! Mindy Cohn had the idea that she doesn’t get killed when her character and Joe drive off together at the end, and that the two of them come back to get revenge on the four of us who put her in the car with him. Which I love! It would be called We’re Killing You.

Hansen: A mother-son murder spree. Since Joe’s always attaching himself to and replacing people—like how he gets rid of his parents when he realizes he has George to take care of him—now he’ll latch onto Karen and get rid of George.

Since the subject of Real Housewives of Beverly Hills is raised in the film, I wanted to ask—and Jim, I don’t know if you watch the show too…

Okay. Jeffery, which cast member—past or present, lead or supporting—would you be the most surprised to learn was secretly a serial killer, and which would surprise you the least?

Self: Ooh, that’s a great question. Okay, the one that would surprise me the least? Off the top of my head, I’m going with Adrienne Maloof. I can’t exactly tell you why, but I just get a vibe. Obviously joking—but I do get that vibe. And who would I be most surprised by? Hmm. [Pauses.] I’m gonna say…probably Lisa Vanderpump? I mean, Lisa Vanderpump isn’t going to kill somebody. It’s just too messy.

Right. I mean, I’m sure somebody on Vanderpump Rules would’ve been dead by now if she were actually a killer.

Self: I mean, Lisa Vanderpump has definitely had someone killed. She’s never done it herself.

Self: Yeah, she might poison, but she wouldn’t do it herself. She might have someone do it for her, but doing it herself wouldn’t happen.

We can probably assume that Ken has been carrying out poisonings at her command for years. Given that so many of the current Housewives are also actresses, did you ever consider casting one as Joe’s mom? Carolyn Hennesy is amazing in the part, but I had to wonder if it was discussed. I could easily picture Lisa Rinna.

Self: I think at one point when we were talking about casting the movie, we raised that idea.

Hansen: We had a number of Housewives on our list at one point.

Self: But I thought it made it something else. You don’t want it to be like, “Okay, we’re sitting here waiting for a Housewife to pop up.” Whereas Carolyn Hennesy, who is such a genius, is able to convey that kind of ridiculous Beverly Hills-woman vibe, but she’s an actress as opposed to actually living that life.

Hansen: When we wrote the movie we actually had people in mind for most of the parts, but we didn’t for that one. And in fact, Drew [Droege] had actually done it in our run-through and he was so funny and so good that we were like, “Do we keep it Drew?” But then Carolyn Hennesy came along, and she has that big energy and big personality. I worked with her years ago on a project and as soon as Drew suggested her, we were like, “Yes, it has to be her.”

Self: She’s a top-notch actress, she’s so great.

Jeffery, tell me about your new book!

Self: Yay! It’s called Drag Teen, it’s about teenage drag queens, and it comes out in April. It’s a really sweet, heartwarming, funny coming-of-age novel from Scholastic. I’m really excited about it.

Awesome, I’m looking forward to reading it! And finally: now that Parker Posey has officially joined Twitter and Instagram, what actress do you most wish would start a social media presence?

Self: Okay, well first of all, most importantly, Parker Posey started following me on Twitter yesterday.

Self: Thank you. Very, very exciting. Apparently she sought me out. But who do I want to join next? For the most part, they’re all there. The one who’s noticeably lacking is Shelley Long. She has a personal profile on Facebook, but I’d enjoy a Twitter and Instagram presence from Shelley Long.

Let’s hope this article can make that happen.

Self: If anything, that’s what this is about.

Hansen: We pursued Shelley Long for a part in this movie.

Oh really? Did you meet with her?

Self: She’s hard to pin down, that Shelley Long. I think she’s just like, “I’m good, guys! I made a bunch of money on Cheers and I am good to go.”

Hansen: We were offering the hefty sum of $100, so I don’t know if that was enough to entice her.

You’re Killing Me will be released on iTunes and DVD on March 8.

The Binge Interview: Zal Batmanglij on “The East”