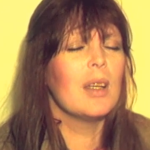 If you thought Carey Mulligan’s version of “New York, New York” in Shame was depressing and interminable, just wait till you hear Nico’s! Just kidding, I actually love this. If you’re unfamiliar with Nico, chances are you’ve heard her on the seminal Andy Warhol-produced The Velvet Underground and Nico or her wistful version of “These Days” in The Royal Tenenbaums, which was taken from her solo debut LP, Chelsea Girl. Back when she recorded those things, she looked like this:

But heroin is a helluva drug, and by 1982 she was the strung-out mess you see in the above video. It’s taken from an experimental film called Mr. Dead and Mrs. Free; the first half is, um, experimental, and then at the 3:10 mark it cuts to an unforgiving closeup of Nico half-heartedly lip-synching to her recording of the iconic anthem. But even at her most ravaged, Nico’s vocals still possessed an ethereal elegance, and her rendition of “New York, New York” certainly doesn’t lack for power. She died six years later at the age of 49, leaving behind a genuinely one-of-a-kind discography. The 1998 anthology The Classic Years is a great place to start, but her first four studio albums are all well worth checking out. Just for kicks, here’s a 1965 promotional clip for “I’m Not Sayin'”, Andrew Loog Oldham’s attempt to market her as a pop singer before she fell in with the Warhol crowd.

New Rilo Kiley Video: “Let Me Back In”