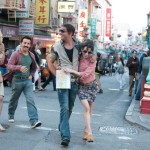 First of all: yes, I’m finally posting this. In what I’m sure was a deliberate attempt to provoke me, Sony Pictures Classics released this much-anticipated trailer while I was in unplugged mode visiting my new nephew back in PA, so I just had to sit there knowing that everyone else was watching and posting and commenting about it while I was just hanging out with my thumb up my ass (the traditional posture when visiting the LeRoy family). But now I’m back to feverishly attempting to post things while riding the shuttle to and from work, so here we are.

What is there to say? I think it looks quite promising. Woody’s 2012 film was the fitfully charming but extremely uneven To Rome with Love, but the year before that he did the superlative Midnight in Paris, so it almost feels too soon for him to have made another film of similar greatness; he tends to knock it out of the park every third or fourth movie. But who knows, maybe we’re entering another Woody golden age à la the mid-90s. Also: helllooooooo Cate Blanchett! If it feels like it’s been a while since you’ve seen her in a leading role, that’s because this is the first one she’s taken on since Elizabeth: The Golden Age in 2007. Oh, how I have missed her.

So between the Woody-does-SF factor, Cate’s welcome back party, and a typically incredible supporting cast (Alec Baldwin, Sally Hawkins, Louis C.K., Peter Sarsgaard, Alden Ehrenreich, Bobby Cannavale, Michael Stuhlbarg, Andrew Dice Clay?!?), I’d like to think we can expect Blue Jasmine to be at least a moderately rewarding watch. And look, they’re eating at The Ramp! I used to eat there with my Old Navy colleagues all the time! I’ll never forgive myself for not making a stronger effort to stalk this shoot while it was all around town. At least I got to attend a last-minute workshop show Louis C.K. did at the Punchline, but of course we missed the one Cate Blanchett attended. Hmph.