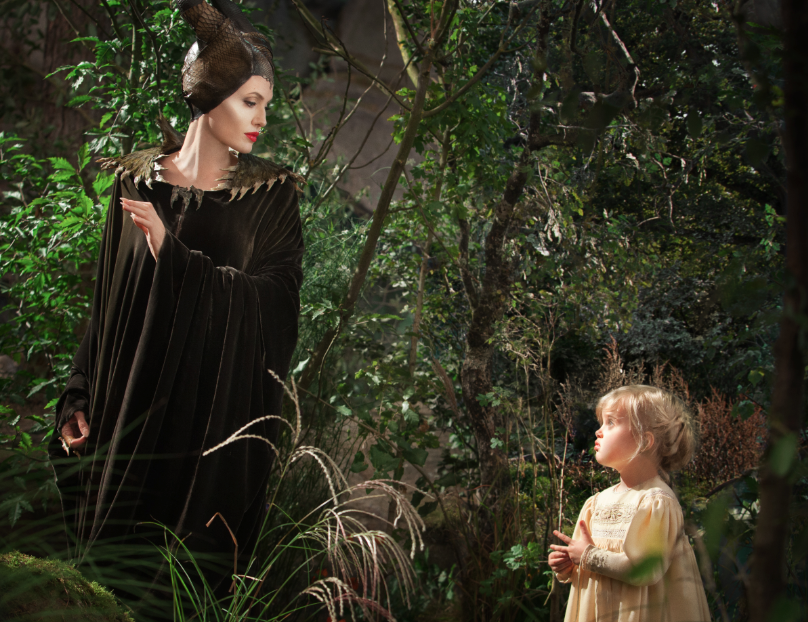 MPAA: Rated PG for sequences of fantasy action and violence, including frightening images

With Maleficent, Disney would appear to have finally figured out how to properly do a live-action fairy tale. Dark and elegant, dreamy and beguiling, but always with the reassuring quality of being read to as a child (courtesy of Janet McTeer’s soothing voiceover), it latches quite firmly onto its motif of finding both darkness and light in everything. From its complex (by Disney standards) characterization of the “villain” herself to its simultaneous evocations of fright and delight, Maleficent is far more ambitious in its philosophical goals than the usual family-friendly fare. It also provides Angelina Jolie the finest showcase for her formidable yet increasingly withheld acting talents since A Mighty Heart (a.k.a. that time we were all okay with blackface).

It could’ve been a gamble to sideline Sleeping Beauty in her own story, as this film does with the decidedly supporting character of Aurora (played in one flashback by Jolie’s own daughter, Vivienne Jolie-Pitt, above, in a scene of such unbearable cuteness that the audience would be well-advised to check their ovaries at the door; as a teen, she’s played by a beaming, perfunctory Elle Fanning). But Disney, aided by screenwriter Linda Woolverton (Beauty and the Beast) and first-time feature director Robert Stromberg (best-known as an Oscar-winning production designer), seems willing at long last to acknowledge what audiences have known all along: villains are always the best and most intriguing parts of any fairy tale. Granted, not every villain would make a suitably fascinating protagonist, but this film’s treatment of Maleficent is an enjoyably rich antidote to the endless parade of plucky princesses that have preceded it.

When we first meet her, Maleficent is a young faerie living in The Moors, a magical realm bordering a human kingdom ruled over by a king who seeks to conquer it. As McTeer’s voiceover tut-tuts the human kingdom for “being a poor neighbor” in a very St. Angie/United Nations-approved manner, we see young Maleficent happen upon a young human peasant named Stefan who’s gone all Jane’s Addiction and been caught stealing in The Moors. But Maleficent pardons the poor boy, and the two of them embark on a charming puppy-love romance set against the enchanted backdrop of her realm. Stefan repeatedly visits Maleficent from the human kingdom in the ensuing years, but eventually stops when his ambition to become the next king gets the best of him. After getting spanked by Mal particularly badly in one last feeble deathbed attempt to overtake her realm, the ailing current king says that his throne will be passed down to whomever brings him proof that they’ve slain her.

And here’s where it becomes especially clear that Maleficent is really a treatise on female power. Stefan, whom we know will be a baddie as an adult because he’s now played by Sharlto Copley, returns to The Moors to visit Mal one last time. They have a genuinely sweet reunion. Then, Stefan slips her a bit of sleeping potion and, lacking the spine to kill her, instead cuts her mighty wings off and wraps them up like an enormous feathered bouquet to present to the king. So, in essence, he roofies her and takes her power. The queasiness of this sequence is further amplified when Mal wakes up the next morning, smile still playing about her lips from the tender reunion with her childhood love, only to discover the horrible, bloody betrayal he’s visited upon her. Jolie plays this scene with an emotionally raw anguish that left me with only one conclusion—this is a rape allegory. I mean seriously, it’s all there: he persuades her to become vulnerable to him, drugs her, and then takes her most sacred part, the essence of what made her so powerful, because he himself was seeking more power. This isn’t exactly super-sophisticated material, but it lends itself easily to a Feminist Theory 101 course.

Having been violently robbed of her sacred feminine power, Maleficent renounces all that was soft and warm about herself, calling upon her faerie powers to transform into a hardened queen, long hair tucked imperceptibly into a foreboding black headpiece. Changing The Moors into a dark kingdom, she turns a raven into her shape-shifting accomplice (Sam Riley) and sets out to avenge herself against Stefan, who’s since become the king. When she learns that he and his wife have had a baby girl named Aurora, she decides to crash the christening and give Stefan’s daughter a curse they definitely didn’t register for. So here, a third of the way in, the film briefly overlaps with the story of Sleeping Beauty as we all know it: sleeping curse set to last from Aurora’s 16th birthday until forever, can only be broken by true love’s kiss, king orders all the spinning wheels to be burned and sends Aurora off to be raised in isolation by three fairies (Imelda Staunton, Juno Temple, and Lesley Manville, each desperately clinging to their dignity) until after her 16th birthday has passed and she’s no longer in danger.

But here’s another place where the movie pleasantly surprises. Rather than reinforcing the same tired, regressive “jealous old queen vs. nubile young princess” catfight shit that sunk Snow White and the Huntsman (along with Charlize Theron’s misguidedly shrieky performance), Maleficent ultimately becomes about the power of matriarchy. As Mal watches Aurora grow up from her lurking spot in the shadows, she begins to feel a connection to her. And when she finally reveals herself to her, Aurora recognizes Mal as the “godmother” who’s been watching over her since she was a baby (“Clocked!”—Maleficent). Aurora is drawn to Mal, and wants to live with her in The Moors after she turns 16. But then some shit goes wrong, and soon evil King Stefan is back in the picture, seeking to reclaim her daughter from Mal’s influence and snuff Mal out for good.

As has been remarked upon in pretty much every piece of writing on this subject, Angelina Jolie is overwhelmingly the primary reason to see Maleficent. This is a delicious performance, masterfully combining otherworldly stillness, exposed emotion, and high glamour. At various points throughout her arc she suggests the controlled, coy poise of Joan Crawford, the haughty strutting and posing of NeNe Leakes, and the feral rage of her own performances back in the ‘90s, before she lost her edge after tragically discovering that saving the world made her happy. She’s a magnetic marvel to behold. But despite what you may have read elsewhere, she is not the only reason to watch this movie. Succeeding where Pixar’s similarly mother-daughter themed Brave failed, Maleficent is that most rare of creatures: a Disney movie with a few ideas. It is a feminist parable about the evil that men do in the name of ambition, the subjugation of women that so frequently occurs in such pursuits, and the transcendent power of the female bond. Also, cheekbones.

Film Review: To the Wonder