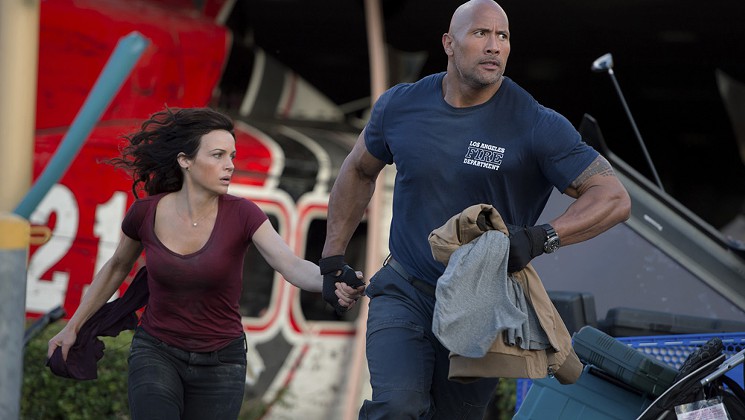 California finally meets the thorough, spectacular fate that readers of the New York Times have long anticipated in director Brad Peyton’s San Andreas. As brutally efficient and defiantly dumb as any disaster porn you’re likely to come across, the screenplay—credited to Lost‘s Carlton Cuse, making a dubious feature-film debut—uses the deaths of millions and the utter devastation of one of the world’s greatest cities (and also Los Angeles) as the backdrop for a conservative, old-fashioned story about an estranged family reuniting; all the carnage is just means to the end of Emma (Carla Gugino) realizing that she never should’ve left her husband, Ray (Dwayne Johnson), because he’s One of the Good Ones. Hopefully that will provide some solace to the untold throngs of victims—your deaths weren’t in vain, guys. The Rock got his wife back!

While it offers scene after scene of jaw-dropping visual effects, white-knuckle action centerpieces, and plenty of those near-death rescues where you realize you’ve actually stopped breathing from the primal suspense of it all (although logically we can predict the outcome), the potential of San Andreas is severely undermined by its simplistic goodies vs. baddies moral foundation. As the story begins, we’re introduced to Ray, a helicopter pilot for California Fire & Rescue. Heroic is his resting speed. Imagine, then, our surprise to learn that his wife Emma has left him for real estate developer Daniel Riddick (Ioan Gruffudd). We know that Daniel is a baddie for a number of reasons: (1) he’s extremely wealthy, (2) he’s building a new skyscraper in San Francisco that will become the city’s tallest building—sorry, Ionic Breeze condo, (3) he’s vaguely European, and (4) he is with The Rock’s wife but he is not The Rock.

We get our first palpable display of Daniel’s villainy when he foils Ray’s plans to drive his and Emma’s daughter, Blake (Alexandra Daddario, whose boobs have been seen by President Obama), from their LA home to college in the Bay Area. Upon arriving at Daniel’s palatial compound in his noble pickup truck, Ray is rebuffed as Blake reluctantly accepts Daniel’s offer to fly her to San Francisco in his private jet. There we have it: pickup truck vs. private jet, a cultural symbol war for the ages. So, Daniel flies Blake up north with a stopover at his massive offices in San Francisco, where she meet-cutes Ben (Hugo Johnstone-Burt), a charmingly flustered young Brit applying for a job at Daniel’s empire. Ben is inexplicably joined by his obnoxious imp of a little brother, Ollie (Art Parkinson), whose primary function is to demand, narrate, and encourage the chemistry between Blake and Ben, and also to be one of those plucky, resourceful Spielbergian kids with a handy guidebook to the city which will come into play later.

Meanwhile, the movie’s designated Cassandra-style Scientist Who Sees It Coming (played with a thousand-yard stare by Paul Giamatti) and his trusty research team begin to notice some unusual activity along the San Andreas Fault, which quickly escalates into the destruction of the Hoover Dam, then a quake in Los Angeles so strong that not only does it level that city, it preemptively destroys most of San Francisco…and that’s not even the ACTUAL earthquake that will claim San Francisco later in the film. (Drinking game idea: take a drink every time a character says a variation on “This is bad,” “It’s not over yet,” or “That isn’t all.”) As the LA quake hits, Ray is (where else?) flying around in his helicopter, while Emma is sitting down to a posh rooftop lunch with Daniel’s equally villainous sister, Susan. And Susan is played by none other than Kylie Minogue!, channeling her soap-acting days for a brief performance that suggests Cersei Lannister as played by Janet from Real Housewives of Melbourne.

Like Daniel, Susan strikes us as a baddie because she exudes an untrustworthy poshness, and also because she bluntly asks Emma about her other daughter who died (we learn this is the root of her and Ray’s marital discord). But the family resemblance doesn’t stop there; by the end of the film, it becomes clear that the Riddick family crest is a picture of someone screaming “Get out of my way!” while shoving people during a life-or-death crisis, because both Susan and Daniel are seen doing this shortly before their own inevitable demises. The Riddicks are Bad People, you see. Ray’s family, however, are Good People, marked as much by their resilience and bravery as by their collectively enormous chests—the better to contain their giant hearts.

This good/bad dichotomy runs down San Andreas like…well, a faultline! (Sorry). Throughout the film, we see the good being spared and the bad being punished (with the exception of Giamatti’s research partner, who dies a martyr’s death at the Hoover Dam and is thus guaranteed immediate entry into Valhalla). And if you’re a Good Person, that also means your actions are justified. In one scene, Ray and Emma’s helicopter flight to rescue Blake in San Francisco is temporarily derailed when the copter craps out near Bakersfield, where the earthquake seems to have had little effect on the town’s usual looting and rioting. Desperate for a new mode of transportation, Ray spies a truck being used by a looter, and decides to steal it. Then, when the looter pulls a gun on him (understandably), Ray knocks the guy out and peels off in his truck. And we’re meant to cheer! Heroic is as heroic does, I guess?

All of which is to say that anyone coming to San Andreas looking for moral ambiguity, non-regressive gender roles (Emma falls back in love with Ray because he confidently asserts his role as her leader/protector when she devolves to a damsel in distress), or small tits will be disappointed. Despite the involvement of Carlton Cuse, this is by no means a clever, fresh, or surprising take on the genre. If anything, it is determinedly regressive and conventional; it even ends with an American flag being unfurled over the wreckage in what’s intended to be an inspirational, reassuring moment. But what it does do is deliver the disaster-porn goods in spades. And since I imagine that’s what audiences will be coming to see in the first place, I doubt they’ll be disappointed. Although each successive disasterpiece seems to destroy the world so definitively that I always walk away saying, “Well, that’s it! There’s nothing left be done in this genre!”—a conclusion that seemed especially true after Roland Emmerich’s impressively comprehensive 2012—there will always be a morbidly satisfying thrill in watching the fiery destruction of the world around us onscreen, then calmly striding back into it to check our phones.