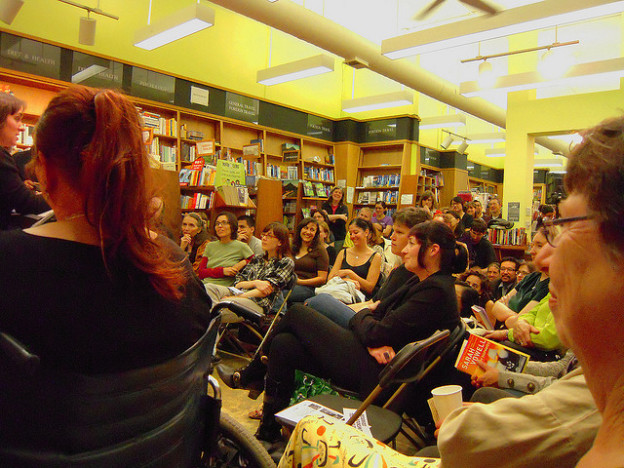 This post originally appeared on The Sassmouth Chronicles on October 17, 2008.

Comic essayist extraordinaire and NPR mainstay Sarah Vowell has a new book out, called The Wordy Shipmates. According to the jacket, it is “an exploration of the Puritans and their journey to America to become the people of John Winthrop’s ‘city upon a hill’—a shining example, a ‘city that cannot be hid.’

“To this day, America views itself as a Puritan nation, but Vowell investigates what that means— and what it should mean. What was this great political enterprise all about? Who were these people who are considered the philosophical, spiritual, and moral ancestors of our nation? What Vowell discovers is something far different from what their uptight shoe-buckles-and-corn reputation might suggest. The people she finds are highly literate, deeply principled, and surprisingly feisty. Their story is filled with pamphlet feuds, witty courtroom dramas, and bloody vengeance.”

Unless you’re a history buff, that may sound pretty dry. I certainly don’t seek out historical literature. But Sarah Vowell has such an infectious, self-deprecating enthusiasm for her material that you can’t help but be sucked in. I read her books more for her personality than for her content—her voice is educated, dry, witty, sincere, self-aware, compassionate, culture-savvy, and conversational. She accomplishes what so many teachers fail at: she tricks unwilling students into actually learning something. I’ll be chuckling over one of her personal anecdotes, and then realize that I just learned something about American history. It’s uncanny!

In short, Sarah Vowell has done more for the American nerd than anyone in ages. She is to literature what Tina Fey is to television. Imagine Lisa Simpson in her 30s, and you have Sarah Vowell. Also, in a brief aside, can I just say that I’m having a hard time writing her name? I type the word “Sarah,” and my fingers automatically begin typing, “P-A-L-” afterward. It’s like I’m possessed! Then, when I was doing a YouTube search for her, I found myself looking for “Sarah Powell.” Blergh.

Anyway, I attended a Sarah Vowell book reading/signing at Stacey’s Bookstore this afternoon at 12:30. I thought it was an odd time to have a fairly major author appearance, but fortunately I work nearby, so I just walked over on my lunch break. I hoped that the turnout would be small, due to the inconvenient timing and relatively uncommercial location of the bookstore. Because when I’m going to something, I always hope no one else will be there. I don’t know why.

Things started out rough right away. As I was leaving my building, I found myself trapped behind an asinine, slow-moving gaggle of my dumbshit coworkers (not from my department, of course), who were traipsing across the lobby while laughing airily and generally being fey. These motherfuckers had BETTER not be headed to Sarah Vowell, I hissed to myself, drawing a concerned look from our front desk girl. My frustration heightened when they glided onto the same train I was taking, but subsided when they remained on the train after I reached my stop (That’s right, fucking stay there, I muttered). I did ask myself why I hate it so much when people like the same things I like. “Would it be so horrible to have coworkers with similar interests as you?” I thought. But my answer to myself was clear: “Well, yeah, if my coworkers suck.” Which they do. Not the ones in my department, though.

I got to Stacey’s with about 20 minutes to go before the reading, so I hurriedly purchased a copy of the book (goddamn, hardcover books are expensive!), and raced upstairs. I was horrified to see that the seating area in front of the podium was already 90% full. I took one of the open seats, knowing that I’d probably give it up when Scott got there, so I could go stand with him. I was seated next to a man I presumed to be homeless, which angered me. “You’re not here for Sarah Vowell,” I thought. “But my boyfriend will be! He should have your seat. But NO, I’ll have to go stand with him when he gets here, while you continue sitting here, unsure of your surroundings, licking your hand.”

Scott arrived about 10 minutes later, so I got up and went to stand with him. We chatted peacefully for a few moments (actually, we bitched about our jobs and how hungry we were). Then, as with concerts, a huge and unruly mass of bookish white people came crushing into the seating area just moments before Sarah Vowell was introduced.

Sarah Vowell was not excited to be at Stacey’s. She was visibly exhausted, possibly sick, and had put about 30 seconds of effort into her appearance. Her energy level was very low; however, once she had trudged her way through several passages from her book, earning much laughter from the crowd, she began to loosen up. And by “loosen up,” I mean she got really sarcastic with us. But we were fine with that.

After the reading portion was over, she said she would answer a few questions and then proceed to the signing, so that we could get back to our jobs. “I was surprised to learn that people in San Francisco actually had jobs,” she said quizzically; it remains to be seen whether that was a commentary on the economy, or just a riff on this aimless hippie city of mine. She fielded some questions from the audience, most of which had to do with the historical parallels between her book and our current political climate. When asked about the upcoming election, she endorsed Obama for president, adding, “It would be nice if the person being sworn to uphold the Constitution had actually read the Constitution.”

One of the best moments came during the final question, in which a young man randomly asked if Sarah had watched National Treasure: Book of Secrets, and if so, had she been offended by the historical inaccuracies depicted about the assassination of Lincoln? She answered that, yes, she had seen the movie with her 8-year-old nephew, and, no, she hadn’t been offended by it. “It’s pretty silly,” she said. But then she went on an amusing riff about the parallels between the movie and her own career. “It’s people on an adventure through history, traveling all over the country, finding out what really happened in all these pivotal moments in the story of America. National Treasure is basically my life, when you think about it!”

After this, Scott ran off to get himself some Del Taco, and I began shoving people out of my way so I could score a decent place in the book-signing line. I was hungry and cranky and I wanted to get this over with. I wound up toward the front half of the line, so I was pleased, although I hate listening to people embarrass themselves by trying to ingratiate themselves with authors at events like this. “I love that story!” “I went to that museum too!” “I met you before!” etc. Have some dignity, people.

When I was about four people from Sarah, some dumb-looking whimsical pixie girl came drifting to the front of the line, cutting because she knew one of the guys in front of me. I hated her on sight. She looked like the kind of girl who spends way too much time wandering around the Upper Haight. I also hated her because she thought she could just leave the line, go buy a book, and then come back. I was like, “Umm, that’s why some of us got here early, bitch.” Then, when she got to Sarah, it got even worse.

You see, while the decent people in the rest of the line had been waiting, a bookstore employee had gone through and allowed each of us to write down the name to whom we’d like Sarah to personalize the book. Since this hippie slag had been teetering around downstairs buying a book while the rest of us were in line, she didn’t have a slip. So, she finally gets to Sarah, and pulls from her plastic bag…a PAPERBACK version of an earlier Vowell book. While this is technically permissible, it’s also bad form. Authors don’t do book tours just so people will buy the books they already promoted. They do them to launch their new book. So the beautiful butterfly walks up to Sarah’s desk, pulls out her paperback, sets it down on the table, and says:

“Hiiiiiiii so I don’t wanna make you like break all the ruuuules or whatever but could you do me a huuuuge favor and write out a message for meeee please it would be totally awesome okay thaaaaaanks.”

I HATE bitches like this; people who drag others into the whimsical fairy tale they believe their life to be. I also hate girls who trade on their perceived cuteness to score whatever they want from people. Hate it. Haaaaaate it. Normally you only see this shit at concerts; I don’t think I’ve seen it at a book signing before.

Sarah just kinda glared at her through exhausted, glassy eyes, and said, “Sure.” “Great!” the girl chirped, and commenced to force Sarah to write out this ridiculously long message to people with names she had to spell out repeatedly, like “Pylon” or something; it also turned out to be a personal message asking them not to get divorced or something. I mean, how fucking tacky. Who is so obnoxious that they go around dragging perfect strangers into their personal affairs, particularly strangers who are nice enough to read for them and sign their books at no charge? Ugh.

Finally, the annoying girl gathered her winnings and skipped away, leaving Sarah even more drained that she already was. One more person, then it was my turn. Pulling together my dignity, I walked up to Sarah, handed her my book, and promptly turned into Kenneth the Page on 30 Rock when he’s in the elevator with Jerry Seinfeld.

“Umm…I really, uh…loved that thing you wrote, about…about…flying from, uh, San Francisco to…uh…Pennsylvania,” I stammered through a huge idiotic smile. She shot me a look like, “Are you really going to make me remember something I wrote in one essay several years ago?” I just kept flashing her the goofy Kenneth smile.

Finally, she appeared to remember. “Oh, right,” she said, “about how people actually look like people there.” She began signing my book, and I broke my smile long enough to remind her more about the story she had written.

“Yeah! And how you just felt so bright and beautiful when you got back to San Francisco,” I swooned. “I really resonate with that.” Cue more Kenneth-grinning, while my mind began racing over the proper use of the word “resonate” (Wait, do I resonate with the story, or does the story resonate with me?) Having signed the book, she pushed it back at me, saying, “Yes. Well…enjoy.” I guffawed with delight, turned, and skipped out of the bookstore, clutching the book to my chest.

Some people just have no dignity.