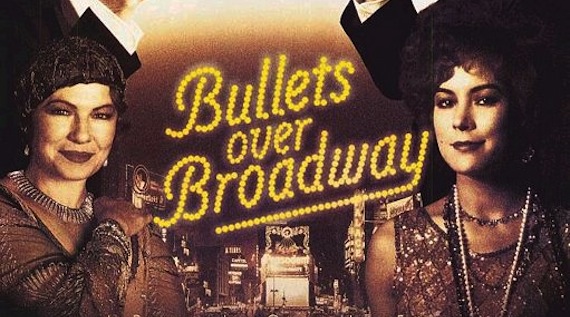 Last night, I enjoyed the distinct pleasure of watching one of my all-time favorite films, Woody Allen’s Bullets Over Broadway, at the spectacular Castro Theatre. I had never seen it on the big screen before, since it was originally released in 1994. At the time, I was (A) twelve years old, and (B) living in rural southwestern PA. We didn’t exactly get Woody Allen movies at the local multiplex.

However, I was also extremely pretentious, wielding my weekly copy of Entertainment Weekly like a sword of cultural superiority over the *sniff* less-cultured around me. So, since I was underage and had no access to art house theaters, I had to wait for movies like Bullets to be released on video. Then I’d promptly rush off to Movies Plus, rent the movie, “copy” it to a blank tape, cut words and pictures from the original box with scissors so I could decorate the otherwise bland Maxell blank tape slip covers, then return it so I could immediately rent more And, oddly, Movies Plus never seemed to notice all the mutilated video boxes I kept returning to them. This was pretty much the most exciting part of my adolescence.

Bullets Over Broadway is, I think, Woody Allen’s most perfect—and perfectly-cast—comedy. And I know this is blasphemous to many people, especially those who guard the legacy of Annie Hall with their lives. And I certainly don’t mean to denigrate that film, or any of Woody’s numerous other brilliant accomplishments. But there’s something remarkably incandescent, almost miraculous, about this film.

I think part of the reason is that it was so completely unexpected. Woody hadn’t made a broad comedy since…well, the 70s. From Annie Hall (1977) onward, Woody’s comedies became increasingly more serious and philosophical, less prone to the sheer madcap absurdity of his early work. And, of course, his career and public persona had taken a very huge pillaging just two years prior to Bullets’ release, when it was revealed that he was having an affair with Soon-Yi Previn, the adopted daughter of his then-wife, Mia Farrow.

He never stopped working, though. After Husbands & Wives (1992), his final film with Mia Farrow, which eerily mirrored their real-life divorce and was released at the height of the controversy, he promptly made a small but well-received Manhattan murder mystery called…well, Manhattan Murder Mystery, starringDiane Keaton, coming to the creative aid of her old friend and famed collaborator.

And then, in 1994, came Bullets Over Broadway. Nominated for seven Academy Awards (including a completely justified Supporting Actress win for the incomparable Dianne Wiest), the film announced that Woody still had it. While many were (and still are) apprehensive about supporting his work, the combustible wit of this film was just undeniable. And that cast! In addition to Wiest, the film starred John Cusack, Chazz Palminteri, Jennifer Tilly, Mary-Louise Parker, Tracey Ullman, Jim Broadbent, Debi Mazar, Edie Falco, Harvey Fierstein, Rob Reiner, Joe Viterelli, and Jack Warden—every single one of them at the top of their game, and working together with an almost impossibly harmonious chemistry.

In addition to being able to watch the movie in such a legendary venue, I also participated in an in-person Q&A with Palminteri, who was nominated for an Oscar for his disarmingly soulful portrayal of mobster/reluctant playwright Cheech. He’s currently in SF doing his one-man show, A Bronx Tale, so the Castro managed to finagle him into an appearance.

His recollection of making the movie wasn’t especially interesting, and his answers tended toward the self-aggrandizing (he said that Woody allowed him to ad-lib but not other actors, because he knew Chazz “got” the part; two of his best lines, “Olive, you’re a terrible actress,” and his closing line, “Don’t speak,” were his ideas; and, perhaps most absurdly, the following boast: “Every 15 years, there’s a project that everyone in Hollywood has to have. There was Stallone with Rocky, then me with A Bronx Tale, and then My Big Fat Greek Wedding. Everyone had to have it.”) Still, it was thrilling to be around someone who played such a pivotal role in one of my favorite movies.

It is often the case with movies I loved when I was younger that, when I watch them as an adult, they don’t seem nearly as impressive. Sometimes they seem downright lame. But there is absolutely nothing dated about Bullets Over Broadway. It is just as vital and flawless now as it was 14 years ago. I think that, out of all Woody’s movies, this one has the greatest chance of standing the test of time. If you haven’t seen it, you really are missing out on something spectacular.

Here is one of my favorite scenes from the movie: the entrance of Wiest’s character, fading Broadway star Helen Sinclair, as she argues with her agent (Harvey Fierstein) about whether or not to perform in God of Our Fathers, the play written by John Cusack’s character:

This post originally appeared on The Sassmouth Chronicles on September 23, 2008.