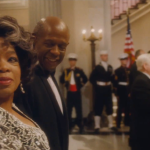 I may have spoken too soon when I wrote earlier about August: Osage County‘s impressive cast. Not to take anything away from it, especially since I have no doubt it will be a considerably better film, but August‘s cast has nothing on the stunt-castravaganza™ director Lee Daniels has assembled for his fourth film, The Butler. And unlike the stunt-casting in Precious and The Paperboy, this time Daniels is taking it to another level by casting tons of big names as…tons of big names. Since The Butler is the true story of Cecil Gains, who served eight presidents as the White House’s head butler from 1952 to 1986, Daniels gets to cast nearly every major American political figure of the 20th century – and if you think he’s gonna miss a beat and cast an unknown in a single role, you don’t know nearly enough about this stunt queen. Let’s have a look:

And those are just the big-name characters. The rest of the cast includes Forest Whitaker as our protagonist, Oprah as his wife, and the following cornucopia of actors in supporting roles: Alex Pettyfer (as a villain of course), Terrence Howard, Cuba Gooding Jr., Vanessa Redgrave, Mariah Carey (the only time those two names have been listed after one other), Lenny Kravitz, Jesse Williams, David Oyelowo, and G.B.F. star Xosha Roquemore. Mark my words: this will be the kind of trainwreck from which you will be incapable of looking away.

The “G.B.F.” Trailer is Everything We Could Have Wanted and More