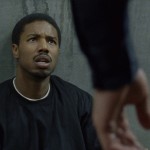 Trailers for some of this year’s prestige films have gradually been making the rounds over the last week, and certainly one of the most buzzed-about titles is Sundance grand prizewinner Fruitvale Station (apologies for the French subtitles, this is an international trailer). Starring Michael B. Jordan, Melonie Diaz, and Octavia Spencer, it is the true story of Oscar Grant, the young man who was shot and killed by a BART police officer under highly questionable circumstances at the Fruitvale station in the early hours of New Years Day 2009.

I’m pretty sure this is the first time a movie has been made about something that happened in the Bay Area while I lived here, and I’m certainly curious (and maybe a bit nervous) to see how this film will reignite the deservedly ferocious response this incident sparked throughout the Bay (the murderer, Johannes Mehserle, was found guilty of the lesser charge of involuntary manslaughter and is currently out on parole). Another possible source of outrage: Melonie Diaz’s character asks the Grant character if he’s going into “Frisco” for New Years. Inauthenticity alert! Everyone in the Bay Area knows that never under any circumstance should you ever refer to San Francisco as “Frisco.” Someone should tell writer/director Ryan Coogler it’s not too late to fix this in post.