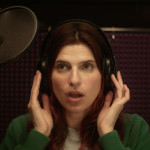 Lake Bell has gradually been carving out the kind of genuinely interesting career she wants for herself, moving from supporting roles in romcoms like What Happens in Vegas and No Strings Attached into the defiantly, brazenly weird Adult Swim universe of Children’s Hospital. We all know she’s funny and lovely, but she now seems poised to become a first-rate triple threat filmmaker with In A World, her writing/directing debut, for which she won Best Screenplay at this year’s Sundance Film Festival.

It’s a genius original premise—an underachieving vocal coach is motivated by her father, the king of movie-trailer voice-overs, to pursue her aspirations of becoming a voiceover star—and Bell is joined by an excellent cast featuring Demetri Martin, Michaela Watkins, Ken Marino, Rob Corddry, Nick Offerman, Jeff Garlin, Geena Davis (!), and a hilarious cameo by Eva Longoria as herself. In A World seems destined to become one of the comedy sleeper hits of the year.