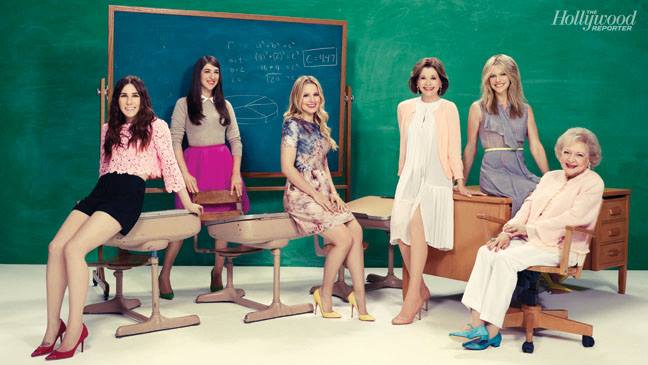 The Hollywood Reporter continues serving up quality group interviews with oodles of amazing actresses. After rounding up some of TV’s top dramatic ladies, they’ve now gathered a pretty dynamite bunch of actresses from TV comedies: Kristen Bell, Kaitlin Olson, Jessica Walter, Betty White, Mayim Bialik, and Zosia Mamet. I mean, imagine: Veronica Mars, Sweet Dee, Lucille Bluth, Rose Nylund, Blossom, and Shoshanna all on the same stage! And while it’s certainly a treat seeing such an awesome group of hilarious women in conversation with one another, let’s just say that the extreme age range on the panel creates some awkward generational differences. It also doesn’t help that they’ve sat them in pairs: blondes, olds, Jews. But they get warmed up after a while. You’ll see.