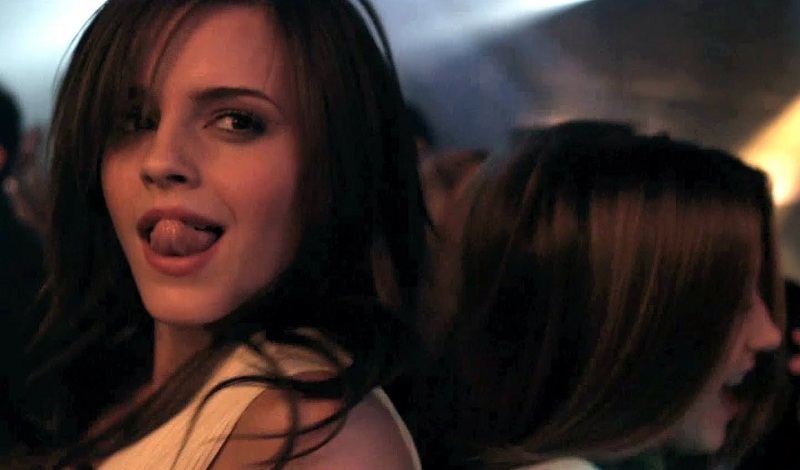 adapted and directed by: Sofia Coppola

MPAA: Rated R for teen drug and alcohol use, and for language including some brief sexual reference

For the first time since The Virgin Suicides, Sofia Coppola has made a film focused primarily on how extreme privilege is perceived from those on the outside, rather than offering insight into the loneliness within it. And while the more marketable and media-friendly aspects of The Bling Ring, her dramatized adaptation of the 2008-09 string of high-profile Los Angeles robberies perpetrated by the titular gang of high schoolers, all those dirty deeds are really just a backdrop for what is ultimately a story about the doomed friendship between two isolated loners trying to connect.

As the film begins, Marc (Israel Broussard) is the new kid at an L.A.-area high school we learn is generally viewed as a haven for flunkies. As for how Marc ended up there, he isn’t a bad kid—he is kind, thoughtful, and sensitive (also: gay). But his attendance was so poor at his last school that he was transferred to his new location. Why does Rebecca (Katie Chang) single him out and pursue his friendship so quickly? Does she innately sense his GBF potential? It’s hard to say, but pursue him she does, and the two are soon inseparable. Marc, narrating portions of the film in the form of an interview with a reporter from Vanity Fair, speaks piercingly of the moment he realized he loved her. She was his best friend, stylish and exciting. All gay boys will relate to his feelings toward her.

But alas, they are not destined to become BFFs. Marc and Rebecca’s friendship has the misfortune of occurring in the spiritual wasteland of southern California, and their desperate desire to give themselves and their relationship meaning plays out against the new, fearfully pure strain of mega-fame that was consuming L.A. in the late ’00s thanks to the collective perfect-storm rise of celebrity gossip blogs, reality shows, and heightened tabloid presence—and everything that rises must converge. All the signifiers of this era, which feels ages ago (at least in internet time), are held up by Rebecca as icons: Paris Hilton, Lindsay Lohan, the girls from The Hills. While it may seem hard to believe now, those names carried serious cache not so long ago.

The first time Rebecca and Marc have a real conversation, Rebecca shares her desire to ape the Hills success model: go to the Fashion Institute, get a glam internship, and eventually have her own line of something or other. And while some critics have accused Coppola, herself no stranger to extreme privilege, of being mean-spirited in her portrayal of these kids, she’s actually remarkably gentle with Marc and Rebecca. Rather than painting them as the inevitable parasites generated by a vapid culture built entirely around a black hole of celebrity worship, she shows them as misguided young kids who are products of their environments. We are aware of Rebecca’s insatiable urge to fill the void within her, partially due to a dysfunctional family life.

And Marc, sweet Marc, knows all too well that he doesn’t look as good as the guys around him. Being around Rebecca and the other girls in the ring makes him feel important, confident. Coppola shows us a playfully poignant clip of Marc dancing and vamping for his webcam while alone in his room, gradually coming to life in a way he’d never expected. But, sadly, all of this is built on a foundation of thievery and delusion (also: drugs). In addition to robbery, Marc and Rebecca are also guilty of taking short cuts in their attempts to become more fully realized versions of themselves. They are pitiable frauds, but frauds all the same.

But take heart, for the tragic tale of Marc and Rebecca is merely the film’s A-storyline. It also has a secondary story, and it comes closer to broad comedy than anything Coppola has ever done before. It involves Nicki (Emma Watson), a genuinely sociopathic member of the ring, and her absolutely ridiculous home life with her SoCal spoof of a mother, Laurie (Leslie Mann). Nicki’s unhinged friend Sam (Taissa Farmiga) lives with them full-time for humorously vague reasons, and Laurie “home schools” them with a daily diet of Adderall and The Secret. It is all so hilarious, you could almost accuse Coppola of taking pot shots at such easy targets—except, of course, that Nicki is based on Pretty Wild reality star Alexis Neiers, and given what we saw of her on that show, we know this is actually a fairly generous depiction.

So really, in The Bling Ring, Coppola is using two stories—one dramatic, one comedic—to paint a portrait of the dire straits in which teenagers growing up in a celebrity-obsessed culture find themselves. The stories are certainly tonally different; while Broussard, Chang, and the rest of the cast register the kind of unaffected, naturalistic performances one expects in a Coppola film, Watson and Mann can’t help but pull focus in their every scene. There could be multiple explanations for this—they’re more experienced actors, they’re more famous—but it feels somewhat like a different movie when they’re on screen. Leslie Mann simply can’t help but be hilarious, her voice drenched with sarcasm no matter how much she fights it. And despite the fact that she genuinely seems to be downplaying, Watson is easily the most memorable and wickedly enjoyable element of the film. Part of it is merely the character, and the juxtaposition of seeing Hermione play a vapid party girl, but regardless, it is enormously fun seeing her in this role.

My quibbles with The Bling Ring are minor. Several of them are factual; the film’s anachronistic musical cues bothered me far more than they should have (despite the 2008-09 setting, the kids dance to “212,” and sing along to M.I.A.’s “Bad Girls” and several tracks from My Beautiful Dark Twisted Fantasy while driving), and I was also annoyed by the fictional repurposing of Dlisted, the funniest gossip blog ever written, as some kind of Perez Hilton-style compendium of news items about which celebutards were hosting events on any given night (these kids were obviously Perez readers, so I wonder if he didn’t grant permission to be featured). The film also drags a bit in the middle stretch, becoming a tedious string of robbery after robbery, none of which are especially dramatic or suspenseful.

But the film has a knowingness about what it’s portraying that was lacking in Spring Breakers, to which it’s been unfavorably (and unfairly) compared in many reviews. Harmony Korine’s film was a gonzo fantasy nightmare with very little interest in reality, while Coppola’s is mired in tellingly observant details. The orgies of selfie-taking, for instance. And the moment where Marc looks at Rebecca’s Facebook page and realizes she has defriended him, which is not explicitly acknowledged by the film; you’ll only notice if you know what to look for. There is also the richly ironic presence of Lindsay Lohan, one of their robbing victims, featured prominently in archival footage. Lohan was another young girl from a troubled home whose pursuit of fame and validation triggered her darker tendencies and led to incarceration, right down to sharing a cell block with Alexis Neiers. Lohan may have been on the inside of the fame monster machine while the kids in the Bling Ring were on the outside, but when the stakes are this corrupt and meaningless, they all end up in the same place. In the pursuit of fame, even winning is losing.