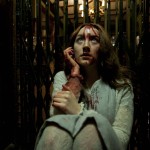 someone I once sat in a hotel room with Saoirse Ronan plays a centuries-old vampire trapped eternally in the body of a 16-year-old girl in the artfully shot horror film Byzantium. Synopsis:

Two mysterious women seek refuge in a run-down coastal resort. Clara (Gemma Arterton) meets lonely Noel (Daniel Mays(, who provides shelter in his deserted guesthouse, Byzantium. Schoolgirl Eleanor (Ronan) befriends Frank (Caleb Landry Jones) and tells him their lethal secret. They were born 200 years ago and survive on human blood. As knowledge of their secret spreads, their past catches up on them with deathly consequence.

I wouldn’t find any of this terribly promising if the film weren’t directed by Neil Jordan, who previously visited the vampire realm with his adaptation of Interview with the Vampire. That movie seemed like an over-the-top turkey at the time, but given what’s become of vampires on film ever since it feels almost like a modern classic in comparison. Plus, there’s just no arguing with Kirsten Dunst in that movie. But on the other hand, Neil Jordan hasn’t exactly had the best batting average over the last decade; his last widely-released film was the Jodie Foster de facto lesbian revenge fantasy The Brave One. Still, Byzantium has garnered some decent advance praise, and at the very least it has an excellent leading lady in Ronan and a gorgeously gothic visual aesthetic.

The Binge Interview: Max Irons and Jake Abel on “The Host” [VIDEO]

The “G.B.F.” Trailer is Everything We Could Have Wanted and More