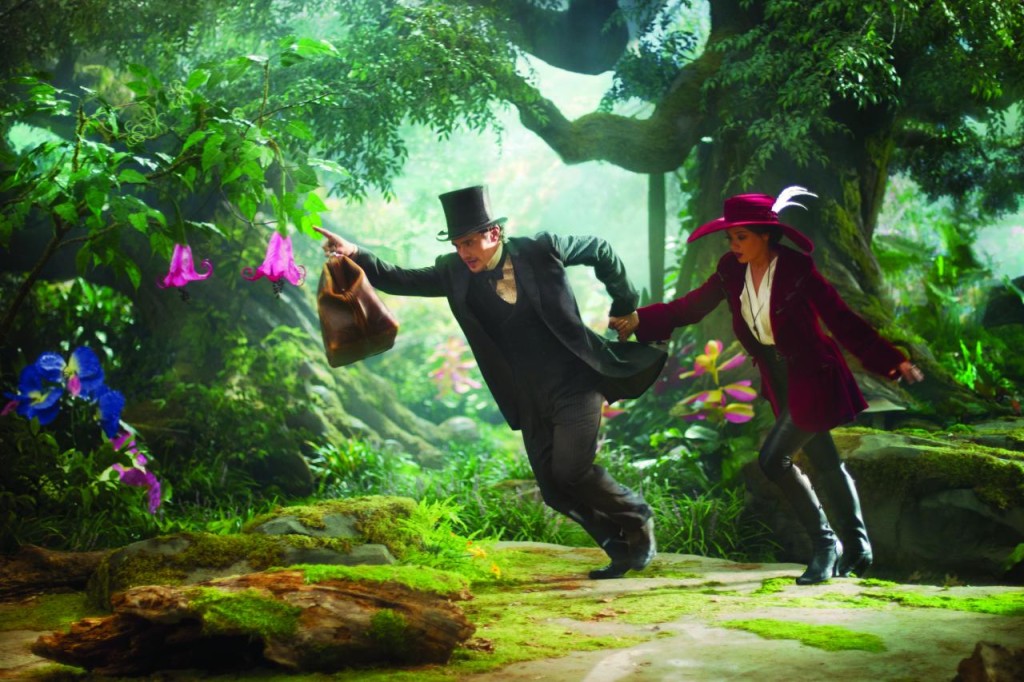 Oz the Great and Powerful is a pleasantly diverting fantasy that certainly withers and cracks next to The Wizard of Oz but is not totally unfortunate on its own terms. This is by far the most family-friendly offering we’ve ever seen from director Sam Raimi, not to mention a hilarious 180-pivot from his last film, the deliciously sick post-Spiderman gorefest Drag Me To Hell (although Oz does share that film’s fascination with crones). It has several gifted actors and moments of engaging humor and excitement, but feels sluggish in pace, twenty minutes too long, and lacking in brains, courage, or heart.

The film opens charmingly, in a black-and-white 4:3 picture ratio, on a dusty old Kansas carnival. It is here that we meet Oz (James Franco), a womanizing con artist working as a magician on the circus circuit. He leaves a trail of broken hearts wherever he goes, women who’ve clearly never heard Ellen Barkin’s immortal caveat from Drop Dead Gorgeous: “Once a carnie, always a carnie.” Initially it’s as distracting to see Franco in a top hat and old-timey suit as it was to see him in a lab coat in Rise of the Planet of the Apes. The more notorious he becomes for his experimental homo-obsessed art film side projects, the more out of place he seems in big-budget studio fare like this; but ultimately, his goofiness and rakish grin serve him well in a role that requires far more artifice than acting.

When Oz’s fuckery angers a rampaging carnie strongman, he flees into a nearby hot air balloon and severs the ropes just moments before the brute reaches him, setting himself aloft — except his relief is cut short when he realizes the balloon is about to get sucked directly into a tornado. This is arguably the sequence in which the original’s superiority looms largest; all the VFX wizards in the world can’t recreate the experience of revolutionary magic we all felt the first time we watched Dorothy swirling around in that funnel cloud and opening her eyes upon a whole new world. Raimi’s depiction of this scene feels lifeless and uninspired, a half-assed homage to the quaintness of the original but with none of the soul.

Rather than waking up in this breathtaking new realm and taking a few tentatively awestruck steps into it, Oz is immediately dragged into the usual Disney “action sequence” nonsense in which he is suddenly being sucked down a raging river and over a towering waterfall. Eventually he lands in a shallow pond where he is discovered by Theodora (Mila Kunis), a lovely young witch whose look boldly combines a big maroon church hat, matching blazer, and ass-hugging shiny black pants. Theodora has two knee-jerk reactions upon meeting Oz: (1) YOU ARE THE WIZARD!, and (2) I AM IN LOVE WITH YOU! How she arrives at either conclusion is beyond me, but she throws herself headlong into each. She promptly sets off to introduce Oz to her inexplicably British-accented sister Evanora (Rachel Weisz, with whom Kunis bickers in a manner that suggests Kyle and Kim Richards), explaining to Oz that all the land’s fortune will be his if he vanquishes the wicked witch, Glinda (MIchelle Williams).

Except – duh! – Glinda isn’t the wicked witch, Evanora is! I mean Glinda is blonde, guys, keep up. Poor Theodora had no idea Evanora was a baddie, genuinely believing that they were fighting the good fight. She also believed that Oz really loved her, so she should probably be a bit more guarded and have stronger boundaries in general. And when Theodora sees Oz flirting with Glinda (whom he discovers is a goodie upon meeting her because, like I said, she is blonde) on Evanora’s CCTV crystal ball, she flies into a jealous rage that transforms her into THE Wicked Witch, with the green skin and the pointy black hat and the drag queen sharpie brows. So the Wicked Witch became that way because she was a needy, obsessive nightmare-girlfriend. This is really a pathetic origin story, one of the most regressive and insulting I can think of. For a movie with three female characters and just one male, Oz nearly fails the Bechdel Test; 98% of the conversations are about Oz or their fathers, and the conflict is all rooted in men and jealousy. Basically Theodora is Kenya Moore and Oz is Walter. There’s even a scene pre-transformation where Theodora says Oz agreed to marry her, and Evanora is like, “Did he agree to that, or did you just say it?” It was seriously word-for-word Kenya.

This is not an acting showcase for anyone, but it is especially thankless for Kunis. She’s fine enough as Theodora, but once she transforms into the Wicked Witch, it’s embarrassment time. She looks and sounds ridiculous, and most regrettably, they force her to imitate Margaret Hamilton’s legendary cackle, as if maybe the green skin and black witch costume wouldn’t be enough to communicate who she’s supposed to be playing. Kunis has always been an impressively raspy screamer, as evidenced by her many yelling scenes as the voice of Meg on Family Guy, but shrillness alone is not enough to realize this character. It is disheartening in general to see such accomplished actors wearing silly costumes and playing make-believe against a green screen; one particularly depressing moment features Kunis and Weisz seemingly stepping on each other’s Big Bad lines, with Kunis shrieking “Rip them to shreds!” at the same moment Weisz throws her arms forward and commands, “FLY!” But at the very least, Weisz and Williams (two of our finest actresses) have enough natural gravitas to elevate their scenes.

Ultimately, Oz the Great and Powerful serves as an object lesson in how greater inspiration tends to come from limited resources. With all the funding and effects wizardry in the world, Raimi and Disney never for a moment capture even a shred of the original’s magic. Also, and I forget to say this sometimes because it feels like I’m fighting city hall, but 3-D ADDS ABSOLUTELY NOTHING TO THE CINEMA EXPERIENCE. This film is in no way enriched by the 3-D element, and even the cute Oz-specific 3-D glasses just made me cringe at the thought of how much money Disney probably spent on them. It’s not all bad in Oz, but that doesn’t make it any more necessary. And with Disney already rushing a sequel into pre-production, let there be no mistake: The Wizard of Oz is an immortal masterpiece of imagination and innovation. Oz the Great and Powerful is a crass, garish money-grab.